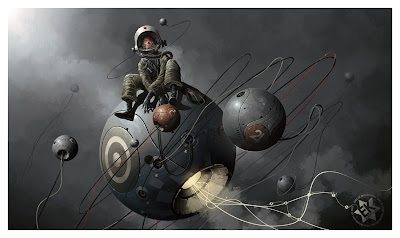 This is one that I've had in my head for awhile. Using the orbs in a planetary formation, with a large orb representing the sun surrounded by smaller orbs representing the planets, is something that I've wanted to do since the beginning of this project. I've focused on the seven "traditional" planets as these correspond to the seven points (six exterior points and one in the center), of the Hexagram, although I've also placed Uranus and Neptune in the distance. The character is the Earth (with the Moon orbiting his helmet), and more specifically mankind as a whole, the qabalistic Adam Qadmon. He represents our unique position in, and our relationship to the rest of the solar system/universe. That he is solitary refers to the fact in some ways we are all alone....and that we are all human, all related, that we are all one. 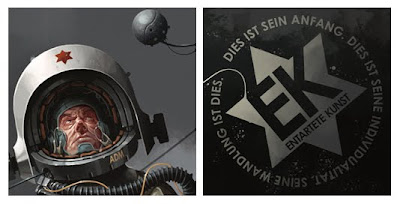 The title ARARITA is a qabalistic name of god formed by a notariqon of the Hebrew phrase "achad resh achdotho resh yechodo temurahzo achad" or "One is His beginning, One is His individuality, His permutation is One", and speaks to the unitary nature of the divine. In the tradition of the Hermetic Order of Golden Dawn the name ARARITA is used in the Rituals of the Hexagram, with each of it's seven letters assigned to one of the planets.
Higher res. and detail here.
Posted by Derek Stenning at 10:46 PM