NATURE AS SEEN BY SICK MINDS 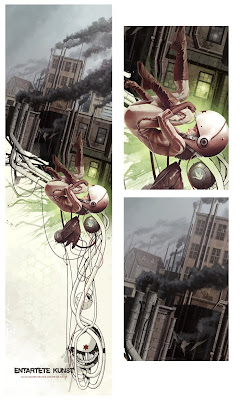 It has been awhile since the last post. I had a busy fall with various side projects but they are pretty much all wrapped up (I haven't forgotten about your tat Doyle!), so hopefully I'll be able to settle down for the winter and create some more stuff for myself. We'll see how it goes.

This image has been trying to force it's way out of me for some time, as it was one of the first envisioned for this series. It speaks to the fact that even in the darkest, oppressive world-view there can be an element of hope, light and potential. The title is taken from one of the deriding slogans painted on the wall (largely referring to the work of Karl Schmidt-Rottlff), at the Enartete Kunst exhibit in Munich in 1937.

I've included a few detail shots as the image is large and a lot of the details get compressed for blog posting.

Posted by Derek Stenning at 8:56 PM