THE CULTURAL BOLSHEVIKS' ORDER OF BATTLE 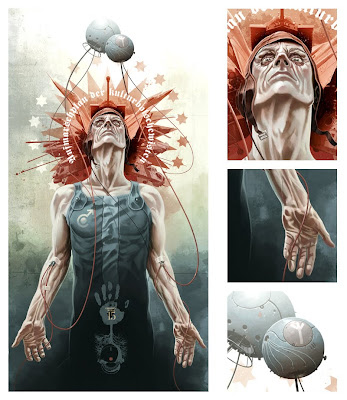 Here is another new Entartete Kunst image. This one wasn't part of the original vision for the series but popped into my head after coming across the title while researching the concept of Entartete Kunst in the excellent book "Degenerate Art: The Fate of the Avant-Garde in Nazi Germany"(Stephanie Barron ed. 1991). The title, "The Cultural Bolsheviks' Order of Battle", like the previous post, comes from one of the slogans painted on the wall of the exhibit, deriding the art on display.

I took the idea of "the order of battle" pretty literally, representing it through the collage of Soviet-era military vehicles, the Mars symbolism, the left palm print representing the left hand path, the sharp shape language and the use of the colour red. The intravenous therapy suggests that this false world view is something that is not self-sustaining and generally unhealthy.

Again I've included a few detail shots.....mainly because Blogger sucks for viewing images. I'll be putting together a Flickr page in the near future for better viewing!