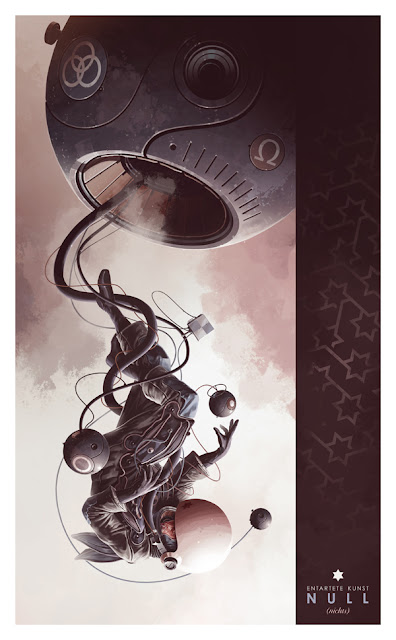 This piece was created to finish off and bookend the EK Series, sharing the same dimensions and side bar elements as the first piece created EK_01 Zydokomuna. But this piece is as much about beginnings as it is about the end. The shared design elements, the circular graphic elements and the title Zero, when viewed as a ring, are meant to loop back, to carry us back to the beginning of the series. The birth symbolism is clear, with the cosmonaut unfolding from the large orb, still attached with an umbilical-like hose. The title Zero, when viewed as a numerical digit, firmly places this piece at the beginning.

For me this last piece is about beginnings. As I close off this series I am now moving on to begin working on new ideas and projects. 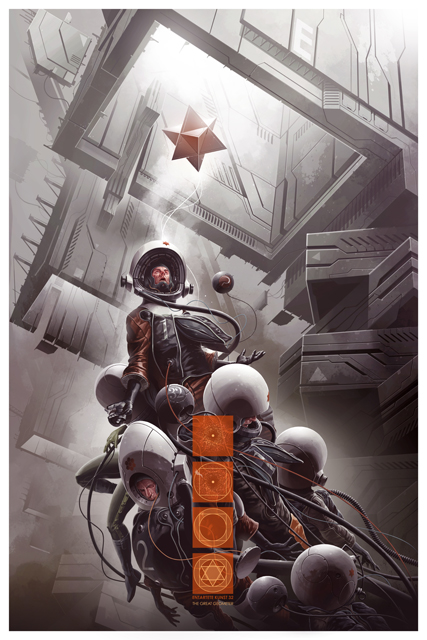 This piece was inspired by an element of a diagram of the Creator's geometry conceived by English writer John Michell (1933-2009). In this diagram Michell uses simple geometry to create four images or steps, that he equates with the act of the creation of the physical universe. In Michell's view a Creator, who he calls the Great Geometer, carries out this act of creation.

I envisioned this Great Geometer as a massive geometric construct. The integrity of this creator was in question for me, as these forms represent the ideas of intolerance, judgment, and discrimination in this work. While one could ascribe these values to creator deities of certain faiths, I came to the conclusion that this creator must be a false god, like some sort of Gnostic demiurge. 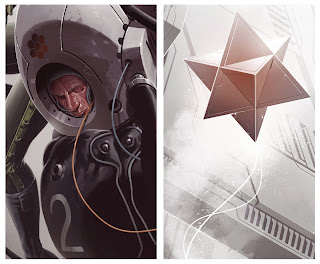 It has been a while since the last post. I've been cranking on a few things, and will have some more posts in the near future.

In other EK news, there are only two kits left in the Dystopic 2nd edition, so grab one if you want one as I don't know if there will be a third!

High res. and details at my Flickr.
Posted by Derek Stenning at 10:43 PM No comments: