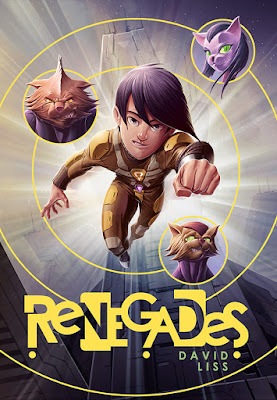 Here is a cover illustration I did for the book "Renegades", the third instalment in the Randoms Series by author David Liss. This one is another great science-fi adventure, with Zeke and his friends continuing their adventure, traveling to strange worlds, encountering bizarre beings, battling aliens, while learning and growing along the way. Plus there is a dose of tween romance thrown in there for good measure. 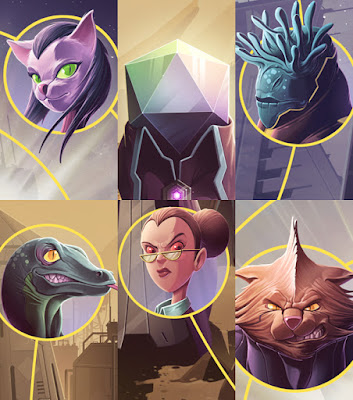 Anyways, the cover was a lot of fun....being a wrap around image like the previous books and featuring a host of the characters from the series in a circular graphic arrangement. This one was a little different in that it contains 2 different locations....one on the front cover and the second on the back, whereas the previous 2 books featured singular locations. This also introduced more colour...but in the end I still think it fits with the other covers.

Renegades will be released in hardcover next September.

Thanks to Lizzy Bromley at Simon & Schuster.
Posted by Derek Stenning at 11:30 PM 2 comments: 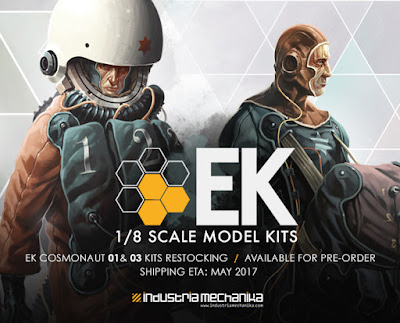 The 1/8th scale EK Cosmonaut 01 and 03 kits are coming back for another run and are now available for pre-order over at Industria Mechanika. The shipping ETA of these kits is May 2017.

Lower quality boot-legged versions of these kits were circulating last fall so if you've been looking for an authentic version, now is the time to pick one up.

For more info. and ordering, head over to Industria Mechanika here.
Posted by Derek Stenning at 9:03 PM 2 comments: