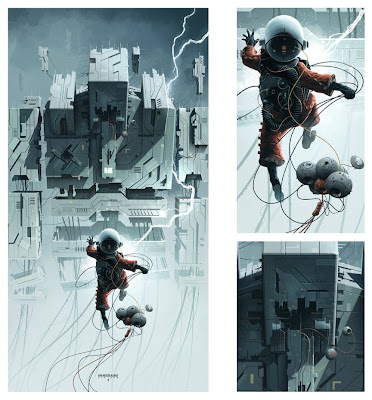 I'd had been picking away at this one on and off for awhile, but spent the last few nights finishing it off before I lost all interest in it. Now that it is done(?), I think I'm pretty happy with now it turned out.

The title "The Tower" is a reference to 16th card of the Major Arcana of the Tarot, and represents the breaking down of established forms to make way for new forms to emerge, divine energy descending from a higher reality, or in the case of Yeats, the location in which the descending lightning of daimonic inspiration is received. The large angular figure takes the place of the tower while the other figure, bracing himself to receive this energy, represents the artist, magician, poet, etc. hoping that his soul will be transformed by the creatively destructive gift of daimonic inspiration.