This one began as a piece created for inclusion in the second edition of the art book "Schwarz Auf Weiss - Style Needs No Colour". As the title suggests, the theme of this book is that a strong design or illustration should be able to hold up in black and white, that the composition, the line work, the rendered values, etc. should create a solid piece, without the use of colour and/or "flashing techniques". That being said, this book is less of a manifesto, and more of a celebration of the strength and impact of black and white art.
When Christian Schupp (AROONE), the creator of the book, asked me to contribute a piece I was eager to participate. I always envision my work in colour, almost always work these pieces up in colour (as opposed to painting in greyscale then colourizing later), and often like to use colour to reinforce the meaning or idea behind the piece, so I thought it would be fun, if not a little challenging to realize a proper EK piece in greyscale.
The piece itself has no particular meaning. It has yet to be determined if the figure is falling/jumping from, or being pulled back up to, the the construct I began calling "The Bridge" during the production of this piece. The title is a reference to this, as well as a bit of a nod to the German expressionist group of the same name. The artists of this seminal expressionist group, including Ernst Ludwig Kirchner, Karl Schmidt-Rottluff, Emil Nolde, Erich Heckel, and Max Pechstien were to suffer at the hands of the proponents of Enartete Kunst. After the Nazis secured power in Germany these artists were among those who had their work was seized, sold off or destroyed, and they were refused to display their work in public. In the case of Nolde, he wasn't even allowed to paint in private.
It is an interesting note that the artists in Die Brucke created a lot of black and white work, mostly in the form of woodcut prints and etchings. 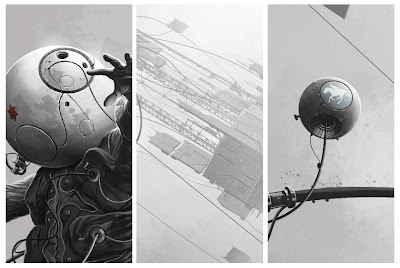 After sending this piece over to Christian for the book I ended up adding a couple of hits of colour. One was the red hexagram, to cement the piece in the series, the other was a blue field behind the horse and rider symbol on the one of the orbs, a nod to the Blue Rider Group. Maybe for me style needs colour.....
Volume 2 of "Schwarz Auf Weiss - Style Needs No Colour" will be published later in the year by From Here To Fame Publishing. From the small amount of the work I've seen from the book, it will definitely be worth checking out.
High res. and details at my Flickr.
Posted by Derek Stenning at 9:11 PM