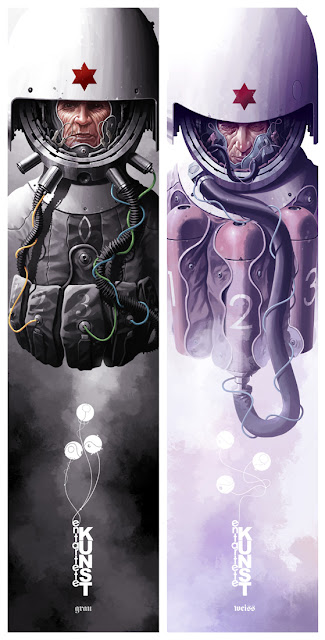 I finally got around to finishing the last two images in the Hexagram sub series. The last Hexagram images were created back in 2009 as some of the first EK pieces. I created the Blue and Red versions first, to represent the idea of artistic inspiration. At that time I had toyed with the idea of creating more pieces using the same format and continuing with the elemental associations, but then decided to just leave it at those two pieces. But a few months later I ended up creating the Green, Yellow, and Grey versions to fill out a line of top sheet graphics for Endeavor Snowboards. Ever since then I've been flip flopping in my mind to finish one more, for a total of six pieces, to complete the "Hexagram series". Well I've finally decided to go ahead a do it.....so here it is. 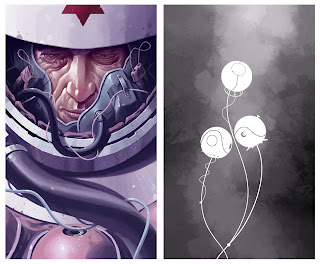 The first piece, "Hexagram Grey - Spirit" was originally created as the graphic for the fifth board in the Endeavor Snowboard line, and was never intended to be part of the EK line. But it has been changed a bit (I don't know why I never painted the face in colour), and granted status as a proper "EK piece".

The second, "Hexagram White - Salt" is the newly created sixth image. My early experiments in using a more washed out and lighter colour scheme to represent the "white" left the piece feeling really inconsistent with the other five pieces so it ended up darker with a stronger use of purple/violet than originally envisioned. That being said I'm happy with the end result and I think elements like the tanks and that fat hose let it stand out. 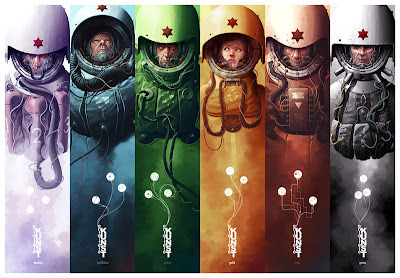 Here is the final line up of all six pieces.

Thats it! Enjoy
Posted by Derek Stenning at 11:49 PM