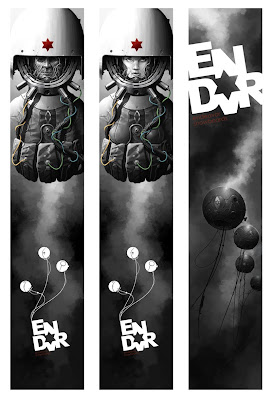 Since there were five boards in this series I had to create a fifth top sheet image. While this image is not considered part of the Hexagram series, and is exclusive to Endeavor, I did follow the same elemental inspiration for it's conception and design. The colour, and symbology all relate to the spirit element and has hits of the other four colours representing that this element is the embodiment of the other four combined.

I've included the two top sheets that I created for this fifth board. The female one was done first, but I was then asked to change this (along with the yellow/air Hexagram image), to a male for the sake of the "jibbers". I've also included the base graphic, which is actually a chunk of the second Entartete Kunst image, "Milkcow" (see below), re purposed, as I was running out of time to get these done!

Posted by Derek Stenning at 1:49 PM