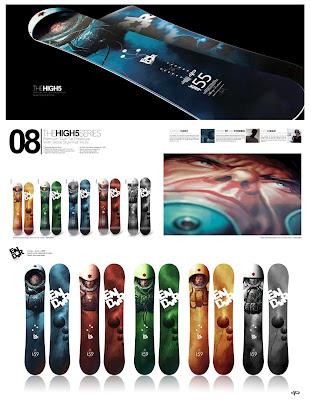 Endeavor Snowboards used my Hexagram Series (see below), for the graphics on their High 5 board for their 2010/2011 line up. The images were perfect for boards, with their long vertical compositions, and the helmets fitting so well into the nose of the board. The top two images come from the new Endeavor catalogue, and the boards will be released late summer/early fall 2010.

The third image is the final the design comp (that's why they are all the same length and have the same info.), where you can see the graphics a little better. The images had to change a little for production. Some changes were minor, like lengthening the bottom of the images to fit the board dimensions, while others were quite extreme, such as changing the female form on the yellow image to a male. This was done as the Board of Directors at Endeavor felt that the gnarled old male faces would be more appealing to the the target market for this particular board ("jibbers" I believe they called them).

Thanks to Endeavor for making this happen, and thanks to Max Jenke and Rob Dow at Endeavor for their time and feedback.

Posted by Derek Stenning at 4:50 PM