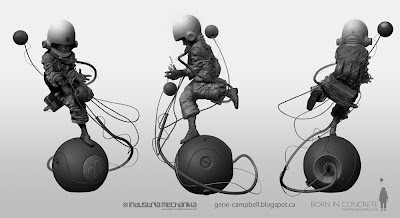 Months ago I posted about model company Industria Mechanika creating a model kit based on my Dystopic piece. Well after a couple hiccups in production (me and Gene, the modeler, moving to Victoria and a redesign of the base), here are a couple sneak peeks of the final master sculpt of the figure. This highly detailed kit will be 1/6th scale, and be composed of resin and metal parts.

Gene Campbell did a great job modelling the kit, enhancing it with his own touches and adding a subtle texture pass to the figure. Gene has modeled my work in the past, as we worked together at Next Level Games, and we currently work together at Microsoft in Victoria. 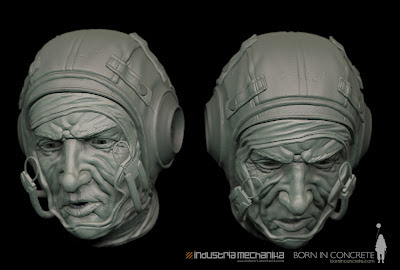 As mentioned above the original base of this model (seen in the original Dystopic piece), had to be discarded, as it pushed production costs and shipping costs (due to size and weight), to excessive levels. The new base not only keeps the cost of the kit within reason, but the use of an orb reinforces the design of the series. It also has the benefit of mirroring the base design of the next kit, "The Star", so the two kits will complement each other on the shelf!

Industria Mechanika is in the process of putting the kit together for production and figuring out packaging etc.. The final product should be ready for release in late summer/early fall of 2012.

Thanks again to Gene for his awesome job, and to FichtenFoo and Industria Mechanika for setting the whole thing up!
Posted by Derek Stenning at 1:06 PM