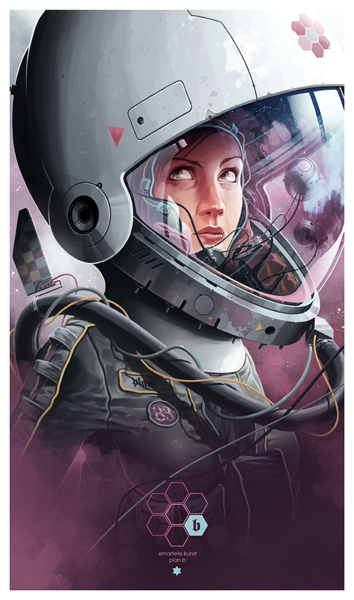 This specially created "EK" piece is on the cover of the latest edition of Imagine FX magazine. Inside this issue I also have a 20 step tutorial describing the creation of the piece along with a few other tips and tricks.

The title, "Plan B", is a reference to the choice of direction taken for this piece. Imagine FX was quite specific in what they were looking for: a close up of a female cosmonaut's face surrounded by her helmet. I prepared two different cover idea sketches and the art director and the editor over at Imagine FX decided to move forward with my least favorite of the two. This happens from time to time and you just have to be professional about it and tackle the job with the same excitement as you would have if the sketch or idea that you preferred was approved. That being said it was a fun piece to work on and I liked how the end product turned out. If I find the time maybe I'll revisit that other idea in the future.

I was a little rushed while working on this one due to a bunch of other things going on. I was busy at work, commuting between Vancouver and Victoria, house hunting and dealing with a death in the family. So after the cover was finished and things slowed down a little, I spent some time reworking the dimensions, extending the height of the piece and I added the graphic elements. 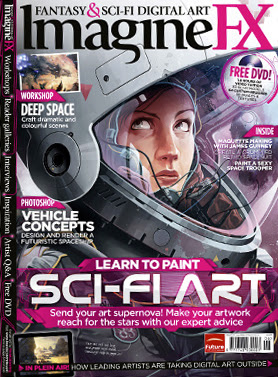 Imagine FX #83 is out now in Europe, and should be released in other regions over the coming months. The issue features some great work by Dave Repoza, James Gurney, Joon Ahn and others.

Thanks to Claire Howlett and Ian Dean for all their direction, input, and feedback, and for being a pleasure to work with!
Posted by Derek Stenning at 12:56 PM